Philips, a Dutch company, was founded in Eindhoven in 1891 (see the official Philips website for an historical sketch). In 1942 Philips acquired the ‘Hollandsche Decca Distributie’ (Dutch Decca Distribution) and became involved in the record industry. The first 78rpm releases on the Philips label appeared after the second World War. These regular 78rpm records were released until 1956. Some songs (couplings of songs) appeared both on Philips Minigroove issues (miniature 78’s, early 45’s) and on regular 78rpm issues. Early catalogues list both Philips (Minigroove and non-Minigroove) and Decca releases. There are no regular 78rpm releases with the Minigroove logo, as the Minigroove logo referred to the new record pressing technique Philips used (comparable to the microgroove name, more commonly used by other record companies), as opposed to the way 78rpm records were manufactured. The “miniature” 78rpm records are different from the regular 78’s – these do bear the Minigroove logo.

In 1950 the N.V. Philips Phonografische Industrie (PPI) was established. The PPI combined all necessary activities (recording, manufacturing and distribution) and became an important player in the record industry, even more when it started to cooperate with the US Columbia label. The labels issued each other’s material (often with new artwork) from 1953 onwards. The cooperation lasted until 1961 when Columbia started to release their records outside North America under the name of CBS Records. For the record, Philips in the UK worked with Columbia until 1964 and the Minigroove logo can be found as late as 1964 on German pressings; it was for instance used on the labels of the 1964 LP “Jazz Workshop Concert” (mono LP P 48 095 L).

In the Netherlands, the logo seems to have been used until 1961. Possibly Philips quit using the logo after the break up with Columbia and/or when it started a joint venture with Deutsche Grammophon Gesellschaft (1962).

All albums (and singles) bearing the Minigroove logo are in mono (though there are very few exceptions, like this album from New Zealand – the link connects to Discogs).

Later Minigroove albums were often concurrently released with stereo versions which did not show the Minigroove logo, but the Hi-Fi-Stereo logo instead (Hi-Z in New Zealand – see the link above).

General Philips logo, used on each and every Philips product,
introduced in the late 1930’s (and still in use, though modified)

Philips ran factories in many European countries (France, England, Germany, Denmark, Sweden, Norway, Spain, Italy, …) and even abroad (Asia, Africa, South America). Records were often pressed in these other countries but in other cases they were pressed in the Netherlands and then exported to their destinations. An example of this are the albums pressed in the Netherlands, which were meant for the German market. ‘Made in Holland’ is shown on the labels but almost all other text is in the German language. Germany had their own presses as well. Some of these pressings said ‘made in Germany’ on the labels, some had German text around the perimeter of the labels (with no mention of ‘made in…’) and sometimes ‘made in Germany’ is printed in the dead wax. Another example are the Dutch pressings for the French market: almost all text on these releases is in French, but the labels say “Made in Holland” (all text around the perimeter is in English).

England and France used numbering systems of their own (though most French numbers were variations on the Dutch numbers: a point was added, like f.i. A 01.172 L instead of A 01172 L), while other countries followed the Dutch numbering system. Most albums meant for the Dutch market had English sleeve notes and said “Made in Holland” on both the cover and the labels. Apart from the overvaluation of the English language by the Dutch, and the international preferences going along with it, Philips probably also figured that these pressings could easily be exported, if necessary. It’s hard to exactly determine the tactics used by Philips in their sales areas, but they were pretty inventive, to say the least.

Note: in all four examples, Dutch and UK numbers are shown for the same release, which shows that the UK had an almost completely different numbering system; only E, F, L, R were corresponding.

On UK pressings, tax codes can be found on the a-side label near the spindle hole. These codes help to date the specific pressing you’re holding. Check the codes on the londonjazzcollector website. Note that some or more titles have been in print for several years, so a tax code does not always indicate an original release year.

These 78rpm records were not a big success, mainly because of the competition with the very successful 45rpm single which was introduced by RCA in 1949. Philips’ miniature 78rpm records were made of vinyl (not shellac) and they were housed in a custom company sleeve with a big hole to show the labels.

The idea was that people could play these records, made with the new Minigroove technique (longer playing time, less noise, unbreakable, etc.), on their 78rpm equipment. The only change needed was a new stylus.

Early 7 inch singles and EP’s probably came in general company sleeves, soon to be followed by non-laminated covers. (Most) later EP issues and reissues were housed in laminated covers and esp. Dutch pressings often showed the text ‘All Philips Records are high fidelity records!’ on the back cover with small black rounds behind the ‘hi’ of ‘high’ and the ‘fi’ of ‘fidelity’. This text was probably introduced in 1956 and was used longer than the Minigroove logo. It should be noted that the lamination often came loose and could be peeled off without leaving much traces if any at all.

With the same size as (regular) 78rpm records but featuring much more music, the 10 inch album was a popular format during the 1950’s and early 1960’s. Philips released many 10 inch albums and also re-released many titles (see for instance album 00134).

Early 10 inch albums came in non-laminated covers (cover constructions are explained below), first with standard designs, then with designs which were specifically made for the release itself. Later issues and reissues were housed in laminated covers, often showing the text ‘All Philips Records are high fidelity records!’ on the back cover with small black rounds behind the ‘hi’ of ‘high’ and the ‘fi’ of ‘fidelity’. This text was probably introduced in 1956, used mostly for Dutch pressings, and it was used longer than the Minigroove years.

In some cases, the lamination was peeled off the covers without leaving much traces, so that can be confusing.
A few 10 inch albums were released in heavy cardboard and gatefold sleeves with a record envelope attached in between both sides of the gatefold cover, which holds the record. Scroll down for more information (“Standard covers”).

The first 10 and 12 inch albums were released in 1951, quickly gaining momentum in 1953, after the releasing deal Philips made with US Columbia Records (in 1951).

Buying albums was a new phenomenon in the 1950’s and slowly grew into a substantial mania in the 1960’s and 1970’s. Philips played an important role and it’s fascinating to see how things developed in the 1950’s. In 1956 an interesting commercial boost was given with the Favourites Series; most classical music with full color photographs by Paul Huf on the front cover, (almost) all presenting UK model Ann Pickford. The albums in this series were relatively cheap and although there was much controversy about it, they were a big success. The record industry became aware of the positive effects of attractive covers and cover art became an extremely important part of their marketing strategies.

Philips used all kinds of different covers, this section describes the standard covers for LP’s and 10 inch albums, made in Holland (f.i. UK covers have a slightly different history). Variations, like the Big Bill Broonzy LP shown above and several others, are not described (yet). The years given may be inaccurate to some extend; it’s what I think it is now, but further explorations may lead to new insights.

The first standard covers were made of one piece of (thin) printed cardboard, folded and glued together. The flaps which are part of the front cover are folded over the top and bottom edge to be glued in place on the back cover. Used from 1951 – 1954.

Second standard covers were constructed in the same way as the first, but the cardboard was laminated (lamination was on the front and back cover). Used from c. mid 1954 to early 1955, so, for a rather short period of time. Note that in the UK this cover construction (with lamination) was used much longer.

The third standard cover was constructed completely differently. I’m not completely sure about it, but it appears to me that the front and back cover’s base is made of one piece of (folded) cardboard. The printed and laminated front sheet with three flaps is glued on the base, with the flaps folded over the edges and glued on all sides of the back cover but the opening side. The printed and non-laminated back sheet is then glued on the back. So this sheet now covers the flaps. At first, these covers do not have the text “All Philips records are high fidelity records!” on the back cover and they were used from c. early to late 1955.

The construction of the fourth standard cover is the same as the third but it now shows the text “All Philips records are high fidelity records!” on the back cover. Sometimes, like the image shows, Dutch text was used, and it also exist in Spanish and Italian variations. It’s most common for Dutch pressings and it was used probably from early 1956 onwards. Dutch pressings meant for export markets (for instance the Dutch made records for the German market) do not show this line, though exceptions may exist.

Note: Philips 7 inch EP’s and singles have more varied cover constructions. It looks to be harder to draw any conclusions about when what was released based on the construction. Cheaper constructions (like the first one shown above for LP’s/10 inch albums) have been in use much longer for singles and EP’s. My copy of
Philips 429 009 BE (“Masters Of The Keyboard”) has the same construction as the first album shown above, but it also has the text “All Philips records are high fidelity records!” on the back cover. 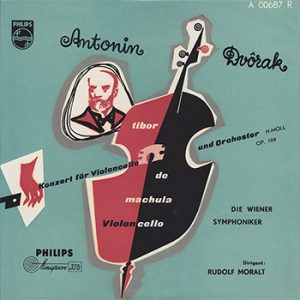